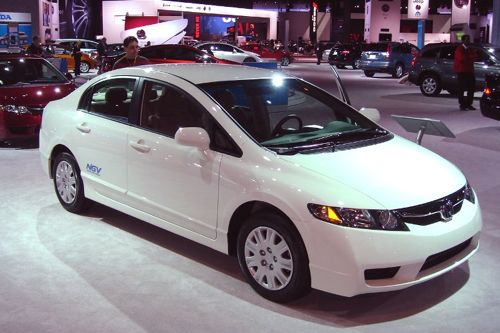 Before joining the Team at Fleetio, I spent a number of years working with a company that was in the process of converting their entire fleet over to natural gas. The scope was huge. Simultaneously, they were building new stations around the state, replacing hundreds of vehicles, and adding conversion kits to others.

As someone involved with selling our customers on the idea, I was lucky enough to be on the front end of this change. My Compressed Natural Gas (CNG) Honda Civic was essentially a rolling billboard - one that still had to fit into my daily routine. Since I have moved on and am no longer obligated to be biased on the subject, I wanted to offer up my experience and takeaways for anyone considering switching their fleet to CNG.

One of the inescapable truths about Compressed Natural Gas, is that it is in fact a gas (shocking revelation, I know). Volumetrically speaking, it takes up a lot more space than gasoline. This was painfully obvious when I opened the trunk of my Civic for the first time. The larger fuel cell (from the factory) monopolized enough space to where a small golf bag (handy in a sales roll) pretty much filled it to capacity.

Fueling up for the first time was a bit of an adventure. When you are dealing with pressures in the neighborhood of 3600 psi, there are a few more safety measures than you might find at a gasoline pump. The car had a steel nozzle that the the hose would securely clamp onto before pushing any gas. That being said, once I went through the routine a few times, a CNG fill up wouldn't take any longer than a regular one.

Aside from the space restrictions and fueling, there was really no way to know that you were operating a CNG vehicle. The engine sounded the same. Throttle response was close enough to not be differentiable. An aside: My front brake rotors were warped almost immediately (as they were with many of my coworkers who had Civics). My best engineering guess at the root of this problem is either 1. Honda doesn't design that model for the hills we have here in Birmingham, or 2. The lower rear weight of the car with a natural gas cell (vs. a liquid tank) causes the car to pitch forward more under heavy braking. So, in essence, the driving experience was pretty much the same.

Fitting Into the Daily Routine

Unlike some fleet vehicles, I was allowed to take my Honda home and use it for personal driving. This, more so than the business end, highlighted the struggles of making a switch to CNG. If you have a central location that vehicles return to daily, then installing a pump or time-fill compressors could solve a lot of your availability issues.

One of my coworkers had a pump installed at his house that tapped into an existing natural gas line. His car would fill up overnight, and unless he was driving more than 250 miles (yep, that's how far you can go on a tank) in a day, he never had visit a station. My territory was pretty far reaching, so there were quite a few times where I was either sweating it out going 50 mph the whole way (air conditioning off) or getting creative with my planned route.

All you need to know about the maintenance of a CNG vehicle can be summed up in this story:

I was told initially that, due to the lack of impurities in the fuel, I could go longer between oil changes. This being said, at 6,0000 miles I was tired of my Civic beeping at me incessantly - insisting daily that the oil life was now at zero percent.

So I stopped by Express Oil Change during lunch one day. As the attendant approached and asked for my current mileage, I was quickly the object of his judgement. He politely reminded me that I should get my oil changed more frequently than as evidenced in this first interval.

A few minutes later, as I'm still being scowled at by the guy up top, a mechanic down below makes a very loud comment about how my exiting oil is in remarkable shape. "You could have gone a lot further than this" he yells from out of my site range. This is when I conveniently made a "hmm…is that so?" face in the direction of my now shamed attendant.

You get the point - being a cleaner burning fuel means that CNG has some obvious maintenance benefits when compared to gasoline. I have been told (no personal proof of this, but it is believable) that the engine life can be up to twice as long in a dedicated natural gas powered vehicle. Obviously, as a fleet manager, this is going to help your bottom line with regards to ongoing expenses, but…

If you are starting to get excited about buying a natural gas fleet of your very own, here's where things gets complicated: Up front costs. Due to the supply-and-demand nature of the auto industry, going CNG is going to run you a little more than the regular gasoline version. To give you an idea, my no frills Honda Civic GX was stickered at $26,000 from the lot. The gasoline version was closer to $20,000. For the foreseeable future, this upcharge will be incrementally similar for any CNG vehicle you buy. Our company did receive a government incentive to knock about $4,000 off the total. Trying to keep up with what incentives are still around is tough, so do your homework before assuming any currently exist.

Contrary to the up front sticker shock, pump prices were relatively refreshing. As I write this, there are a number of stations in our area (Southeast US) that are priced $1.00 to $1.50 cheaper per gallon equivalent (matching mmbtu content) cheaper than gasoline. Some states are higher than this, and some are much, much lower. The average price in Utah, for instance, currently hovers around $1.50 per gallon equivalent. That could be a pretty quick payback if you are driving a lot of miles every day.

One annoying thing to add is that there are states requiring special permitting in order to own/operate a compressed gas vehicle (in Alabama, this applies to propane as well). The process is a bit archaic and they charge an extra fee for a sticker that takes up way too much of one's windshield, but it's the law around here. Check on your local regs just to be sure.

When I gave up my company car back in August, it was with mixed emotions. For two years, my mode of transportation was a conversation piece on wheels. People would stop me quite often to ask questions about the car, and it always garnered a positive attitude from folks. In a way, I think the idea that there are working alternatives to gasoline gives people hope.

In reality, I had to purchase a personal vehicle immediately. This is where I exposed the biggest issue fighting the CNG movement: availability. Whether you are trying to find a vehicle (in my case, used and reasonably priced), or a place to fill up (only one public station near my daily commute), the options are few and far between. I went back to a gasoline-powered car.

If you are brazen enough to build your own large-scale compressor station to fill vehicles quickly, the likely price tag is half a million dollars (US) or more. Investors need vehicles on the road to prove that that building out the necessary stations is a wise decision. On the other end, automakers aren't going to crank out millions of new CNG models if there are few places to fill them up.

Plenty of folks out there remember when CNG was all the rage. My previous employer has ripped out more than one fueling station in the last few decades. The staying power this time around, however, is powered by a natural gas supply that has never been seen before. Shale gas has changed the big picture entirely.

With the relative security of price (very few offshore natural gas rigs left) and massive reserves, the new CNG Movement has serious promise. As with anything on this scale, however, the early adopters will have to pave the way for widespread growth. In many cases, these are going to be companies with predictable routes, tighter emissions regulations and easy access. My previous employer was in the natural gas industry, so it was pretty much a no brainer.

There are some folks who have gotten their toes wet, so to speak, by retrofitting a gasoline vehicle with an additional CNG tank. This allows for a much greater range and the ability to switch back and forth depending on availability. This way you could still experience a fuel cost savings.

What I learned, however, is that people are inherently lazy. This pricy (at least $4,000) add-on is not going to get utilized nearly as much as one might expect. If your employee is choosing between the readily available gasoline and an out-of-the-way CNG station, they are going to take the easy route - especially if they aren't paying for the difference.

Slowly but surely, the CNG market is moving from an "I own one to get that happy feeling" mentality to the "It makes complete dollars and sense" argument. Price and availability are issues that can easily be resolved with time. As I write this, equipment for CNG filling stations is in short supply all around the country. The demand is growing.

Is CNG right for you and your company? Whether you are planning for today or two years from now, the answer is largely dependent on these key factors:

Availability - are you in a region where there are existing natural gas stations or abundant pipelines (possibility)?

Mileage - are you spinning the wheels enough to ensure a quick payback?

Regulatory Environment - is the federal/state/local government offering up the right incentives and pricing to make CNG a good financial decision for you?