The first few months in a leadership role can make or break your experience at a new company. We’ve applied a few fleet strategies to the framework outlined in "The First 90 Days" by Michael D. Watkins as a guide for new fleet managers looking to succeed from the get-go. 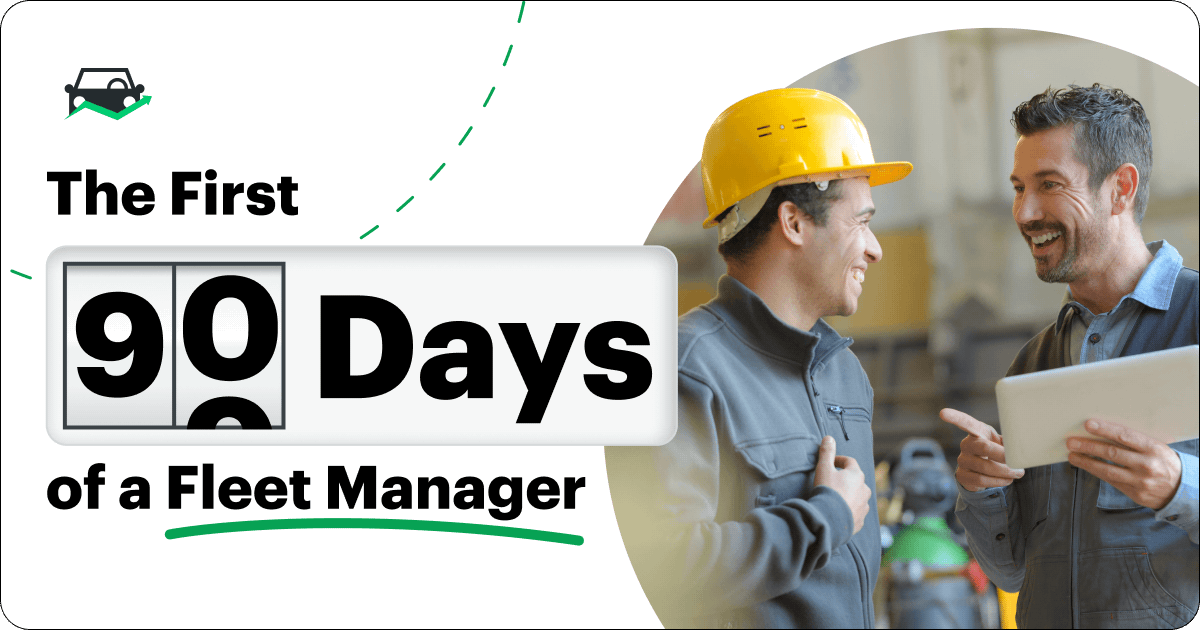 Why is it important to have a plan for your first 90 days?

Fleet management is an incredibly dynamic profession that consists of a lot of varying responsibilities, and the breadth of tasks you might face can quickly become overwhelming, especially when you add in all the more interpersonal facets that come with taking on a new job. Setting intentions and goals for 30-, 60- and 90-day benchmarks can help you stay focused on what matters and make the most of your onboarding period without getting lost in the minutiae of fleet management.

Here at Fleetio, we’re lucky to have former fleet managers among our ranks, and two of them joined us on our podcast, The Fleet Code, to talk through what the first 90 days in a new fleet management position actually looks like in practice. Mike Eldridge worked in logistics for a Fortune-500 company, and Jon Hinkle served as a fleet manager at a well-known waste management company.

Mike and Jon broke down a few strategies that you can utilize to quickly get your bearings in a new fleet and move the whole organization forward with confidence.

Every fleet is different, and transitioning to a new fleet can also mean moving into a completely different industry. For Jon, taking on a role as a fleet manager meant expanding into the waste management industry as well, and that came with a new learning curve.

Jon’s solution was simple – learn from the people around him who had been working in waste management a lot longer than he had, including the people who didn’t necessarily work directly in the fleet function of the company, like the operations team.

"I used them to really help me learn that side of the business. And I think that helped early on establish that rapport, that fleet is not this standalone entity that operations can’t trust. I tried to establish that trust between the two right away, and it helped me learn my job quicker as well."

2. Get to know the organization and the people in it.

Chances are, you won’t be a one-person team as a fleet manager – you’ll have plenty of drivers, technicians, and other external stakeholders to acquaint yourself with. Figuring out how your role relates to the rest of the company and familiarizing yourself with everyone you’ll be interacting with is vital to truly understanding what your job will entail.

Your coworkers and employees can become a solid source of information in your first 30 days, answering questions that onboarding documents can’t. If you work for a larger company with multiple locations, you may even be able to learn from someone who has already held your position, like Jon was able to. But don’t forget that there’s a lot that you can take away from your direct reports as well.

"I had almost no mechanical background coming in," Jon says. "So I used that to my advantage and I pretty much started every conversation with my mechanics with, ‘I don’t know anything about vehicles or trucks, so teach me.’ And that accomplished a couple of things. One, it got me quicker familiarity with what I was managing early on, but it also let the mechanics share with me their knowledge, and early on, kind of show me what they know."

3. Figure out what resources you have at your disposal.

In addition to reaching out to your team, you should also find ways to tap into other resources you might have access to. It can be easy to silo yourself into your job description, but working with other departments and even third party vendors can help you understand a lot about your role.

"I would talk with the vendor that I used to fix the vehicles to get a better understanding of what was going on with the vehicles, my operators, my supervisor," Mike says. "I did reach out to a couple other branches to touch base with their fleet managers to try to get some ideas as far as what they were doing."

There may also be old documentation that you can access, whether in physical files or through a fleet management platform, that can shed light on the way the fleet has been run in the past and bring forth any immediate deficiencies you should be aware of. Even a lack of proper paperwork can be informative – you’ll know right off the bat that keeping better records can be one of your top goals for your first few months. 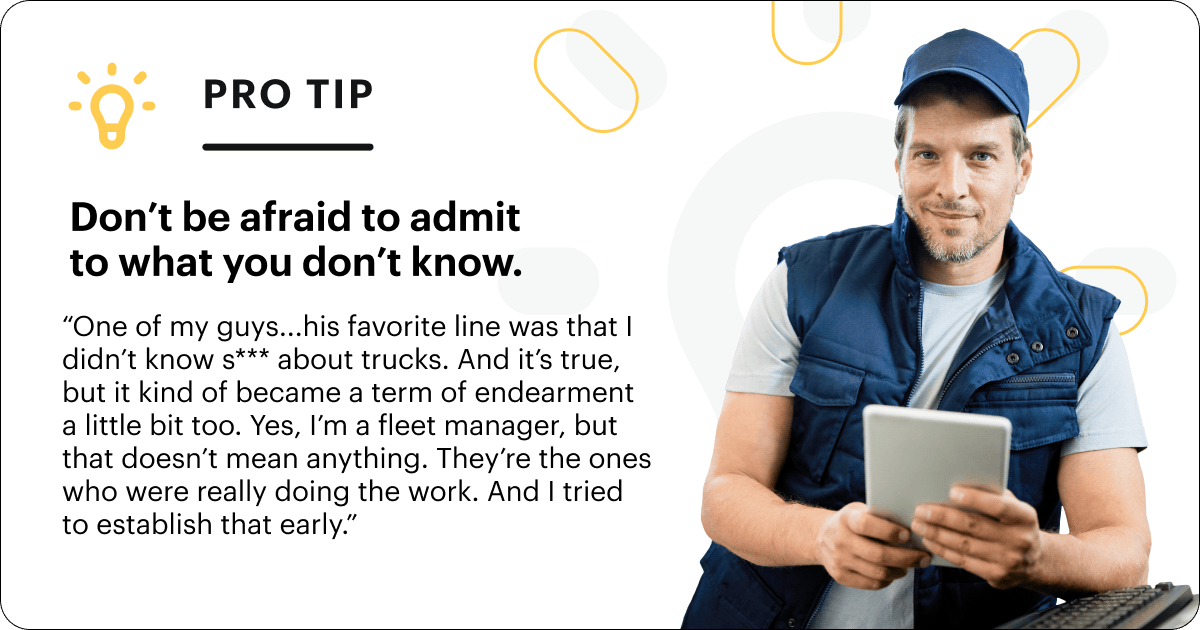 4. Audit your fleet to identify strengths and weaknesses.

Knowing what your fleet does well and where it might need some improvement can be a good way to organize what your short-term priorities should be. For Mike, that meant addressing safety, as he’d found many of his fleet’s processes on safety to be lacking.

"Safety was always first for me," says Mike. "Really just kind of keeping that focus on the safety and making sure we were 100% compliant with our preventative maintenance intervals, because that goes a huge way of making sure that those vehicles are safe, double checking them."

While it’s important to personally identify any shortcomings you see, also talk to the mechanics and drivers who’ve been around for a while to learn what they consider to be major issues or problems with the fleet.

5. Figure out what your key metrics are.

If you’re like Mike and work for a larger operation, the company may have specific metrics that they choose to measure on a recurring basis, and you should work to focus on those standards as your point of emphasis.

"We actually had a yearly audit that actually came from our corporate head office," Mike says. "They’d look over the vehicles, they’d watch the operators do their inspections… And that’s what’s published company-wide, so anybody could see at each location, essentially, how well the fleet was being run. So as far as how we were doing, they kind of have that covered and could figure out everything that they were going to judge us on."

But if you don’t have the same level of overhead guidance, you might have to figure out your own path forward. For Jon, that meant deciding what to track and how often to track it.

"I reviewed our work orders daily that my mechanics did, or tried to, daily," Jon says. "I always had kind of an eye on what was going on, what my mechanics were working on. I could spot any trends. If all of a sudden I saw four or five trucks with the same issue, I could dig into that further versus waiting for a quarterly audit… If I waited until an audit, I might have three months of bad data from a parts standpoint that I have to fix." 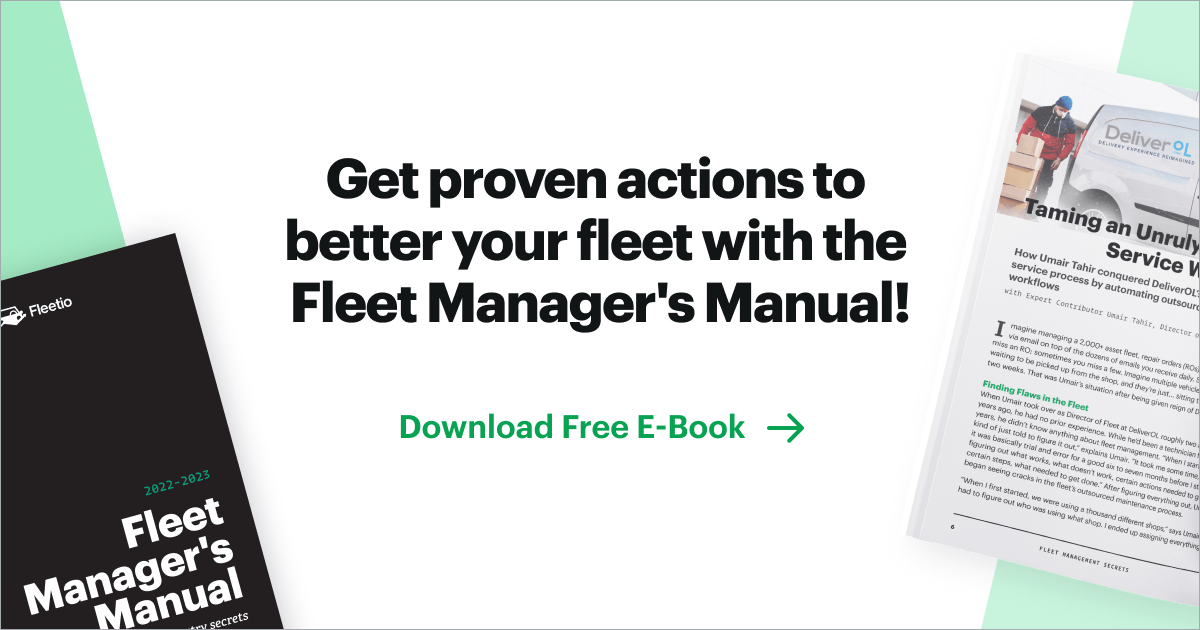 Once you feel like you’ve established your place in the company and have familiarized yourself with the landscape of what you’re up against, it’s time to convey your assessments and goals to the rest of your organization and come up with a plan of action. But just like you should include your mechanics and drivers in coming up with the fleet’s problems, you should also actively include them in the solutions.

"Very rarely did I ever just say, ‘This is the way it’s going to be,’" Jon says. "I would draw people into those conversations and say, ‘Hey, I’m thinking about doing it this way, tell me why that won’t work or will work.’"

Having these conversations can go a long way in building trust, as well as vetting the methods you might choose to address the issues you’ve dug up. But because there might be a time in the future where you do have to lay down the law, it can also lay the groundwork for being able to exercise more graceful authority when you need to.

"For those moments where you have to say, ‘This is the way it’s going to be,’ people are more likely to buy in on those times because you have allowed them to be so much more of a part of the conversation the rest of the time," Jon says.

7. Find ways to advance your team.

Leadership can and should always be paid forward. As you begin to settle into your leadership role, start looking at the people you’ve come to know over the past few months and pick out who you believe might have potential to be leaders themselves, with the right training and opportunities.

"Bring them into decision making processes more frequently to help give them a sense of ownership of things," says Jon. "And if possible, even elevate them into actual positions of leadership."

You should also identify some means of allowing people to advance their careers with new skills and certifications. Mike advocates for making sure that those opportunities are clearly conveyed and available so that drivers and mechanics understand any prerequisites that might be required.

"If I didn’t think they were ready, we’d come up with a plan together on how to get them ready so they’d qualify for that," he says.

It’s important to maintain the same level of attention and involvement you have in your first 90 days well past your introductory period. Consider keeping regular time on your calendar to meet with the people who guided you through your onboarding period, and set consistent office hours so your direct reports feel like they have unfettered access to you when they need it.

While office hours and meetings are great, you should also get out and about and interact with your coworkers regularly so you can keep tabs on ways you can better serve them as a manager.

"I think that you have to think about your open door policy as a two-way door, right?" says Mike. "Like, it’s yes, you can always come and talk to me in my office when you need to, but you have to get out there and just check in with them, see how their day is going […] You absolutely have to get out of your office in order to get any sort of real value out of that."

Getting involved outside of your desk not only keeps you in the loop and educates you on processes you may not fully understand yet, but also builds trust between you and the people that work for you.

Want more tips to carry you through the first few months of your new role? Our new series, Masters of Fleet, covers core principles that can help you break down some of the bigger tasks that make up fleet management – at no cost to you.